Creating a logo seems pretty easy. But after staring at a blank sheet of paper for a few hours waiting for inspiration to hit, it becomes clear that creating a logo is actually pretty dang hard.

The Point of an Artist Logo

A logo isn’t just an image – it represents your art style, your vibe, your tone, you as an artist.

When you google “logos,” most of what you get are company logos. But your logo isn’t just illustrating (ha) a product or service – otherwise, it’d be something having to do with tees! You’re not a company. You’re a people. You’re a creative people who has to make a logo that represents both yourself and your brand of art.

Think of it like creating a band logo. The logo needs to represent the vibe of the band so that by looking at it, you can get a feel for what style, genre, etc. to expect.

The Basics of the Basics

There are some basic rules to follow when creating a logo for yourself.

Overpacking a logo actually makes it less associable with your brand. It’s a logo – not a collage…even if your thing is making collages.

It’s easy to overload a logo. You want your logo to be a preview, if you will. Something that gives people a little taste of what to expect from you as an artist.

One example of this is Ryan Beshel’s logo. He’s a media personality, publicist, and fashion guru. His icon? A bowtie. 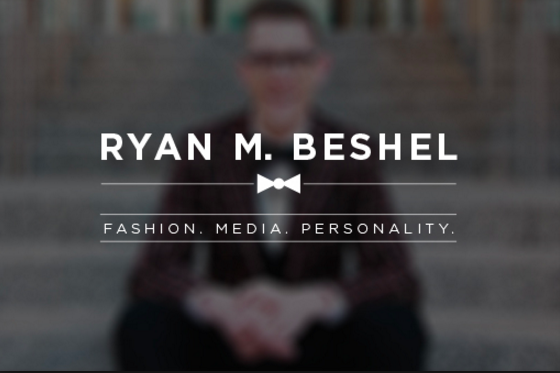 It’s a simple logo, but it effectively wraps him up as a guy who does wear bowties a lot (and has a tiny tattoo of one) and someone who knows and cares a lot about fashion. He has a bowtie on his business card and is often recognized as “the bowtie guy,” effectively linking him to his brand.

Make your logo something worth remembering. People won’t just remember the logo – they’ll remember the person and the art behind it!

One way of doing this is to give your logo a story. I’m not saying pack your logo with all the details of this story. But think about Ryan’s logo – the surface story is that the logo is a cute bow-tie. The story under the surface is that he loves wearing bowties but also loves fashion.

This might seem like a given but sometimes it’s easier said than done. If your logo is going to have any text in it, it needs to be readable. Otherwise, why have it there at all?

You don’t want a logo that looks awesome as, say, a Twitter profile pic, but terrible on a business card. Make your logo something that can look good across platforms (and on prints/tees too).

Different colors elicit different emotions. The colors you use in your logo should be colors you use a lot or that best represent you. If all of your art is pastel and soft, having a red logo with hard lines and fire shooting out the sides would be kinda weird.

Don’t do one of those hipster railroad crossing type signs as a logo. Been there. Seen that. Make something that represents you – not half the world.

If you’re going to include text as a key part of your logo, consider making it a custom font. If not, choose a classic font that fits with your artistic style and the image of yourself/your brand that you want to portray…but without throwing it in peoples’ faces. If you do comic art, using comic sans is not the way to go. Using comic sans is never the way to go.

If your logo is an original illustration or a piece of art you created, keep it simple with the font. You don’t want to distract from the image or have too much going on.

But if you are going to have a text-heavy or text-only logo, custom font is the way to go!

For example, Skrillex’s logo is often the word SKRILLEX in a custom font. But he uses the three lines in the middle that make up the “i” and “l’s” as a standalone logo.

Custom fonts definitely take more creative muscle than just picking one of the fonts that came with Photoshop. But it’ll make a text-only logo stand out. Think about Coca-Cola’s font. It’s no Helvetica Light – it’s unique and is synonymous with the brand. You can really get creative with this and make it something that is 100% representative of you by you.

Dribbble is an awesome place to look at designs and get inspired to make some rad logos. Also check out awwwards and Paul Rand.

And here are some examples of Artist Shops that have logos that effectively represent what they’re all about: