It’s easy to look at the social media accounts of artists who have hundreds of thousands of followers and go, “they’re just awesome…that’s it, that’s their secret.” But even the biggest artists had to put a lotta work in to get their art noticed.

Sure, skill and making good art is part of it. But those followers were earned – not magically gained. And once that following is gained, if you don’t give followers a reason to stay a fan? Then they won’t. Snooze ‘em and ya lose ‘em.

So let’s take a look at two of our biggest Artist Shop names – Tara McPherson and Quyen Dinh’s Parlor Tattoo Prints – to try and see what makes them tick and what we can learn from them.

Tara McPherson was one of our pioneer Artist Shops, and what a way to start! Her super unique, cotton candy colored and starry aesthetic has gained her almost 99,000 followers on Instagram.

She only did her first poster in 2002, wanting to be an astronomer before she got started in the art world. She started making posters for her “mostly all-girl” punk rock band to promote their shows. She started her official L.A career making posters for a local club, which led to creating posters for more venues, in addition to illustrating comics and toys. Her art eventually appeared in Juno, which is kind of a big deal (via Observer)

As big of an art star as Tara is now, she didn’t get there overnight. She put in the work to get her work noticed, starting small by designing for her band and local clubs, and growing from there.

The way Tara got her art noticed was by illustrating posters for others, but in her style. This could be a really good thing to try – maybe just by starting with local bands and venues to see if they’d work with you and let you make a poster. It’s great visibility for whatever you’re promoting by giving them unique art, and amazing promotion for you because it:

No, not like the video thing you can do on an iphone. One thing Tara is constantly doing is making IRL appearances at conventions and hosting pop-up stores and galleries. Just this year, she’s already done eight pop-up shops in addition to appearing at Indiana Comic Con, East Coast Comic Con, South by Southwest – and convention season is just starting.

Here are a few things that Tara McPherson does on her social media that could be good to look at and consider doing for yourself: 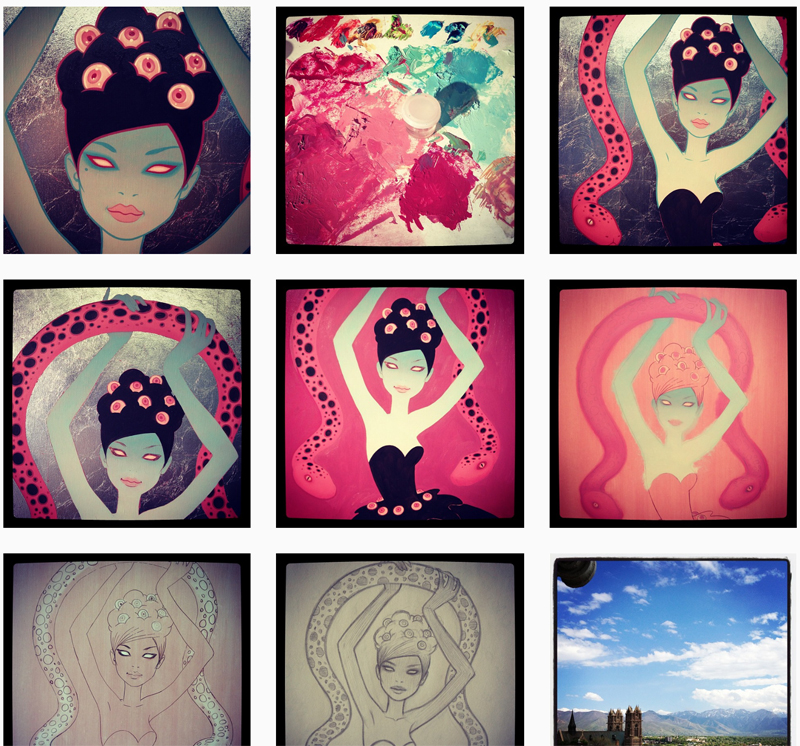 Some Advice from Tara:

“I always think of success as a trifecta…One part talent, one part hard work, and one part a little bit of luck! There was never some ‘big break’ that I had, it was a nice slow progression over many, many years. I started with a sweet little handful of my passion and love, and it snowballed into something amazing and wonderful. When you’re starting out it may seem overwhelming if you look at the whole success of someone’s career, but taking it in, in little pieces and steps from the beginning, you see that each step is possible. And with a lot of drive and tenacity, you could do it too!”

Quyen also didn’t get her start in creating art right off the bat, but rather was getting set to work in the film industry, and has said that it took her about nine years to get to where she is now – with over 84,000 followers on Instagram. The key thing to learn from her work (besides her incredible backstory)? You have to put in the work. And a lot of it. But also be smart about it. She runs Parlor Tattoo Prints full time and, while many of us have to have day jobs as well to support ourselves, she’s a testament to how hard work can pay off – literally and figuratively.

1. Niches on niches on niches: Quyen appeals to not one, but two niche audiences – the tattoo world, and the pop-culture lover world/geek culture. She does fanart for pop-culture staples, but in a flash tattoo style that she has managed to make her own.

This can be a great way to attract an audience: do pop-culture ‘fanart’ in your style. You’re tacking yourself onto an already widely-known, popular franchise that acts as a vehicle to get your own style and art seen.* It gets your foot in the door with something familiar – fanart – but highlights your art by setting itself apart and showing people how your style differs.  And at the same rate, stay on top of trending pop-culture things. If there’s a new Star Wars movie coming out or a celebrity you love passed away, draw something special for just that event, put it on social media, and hashtag it accordingly.

*Make sure to be careful about copyright crap when selling fanart though – some companies are stricter than others.

One thing that’s super clear about Quyen is that she works super hard. You can tell just from looking at the sheer amount of art she puts up on Instagram and the variety of prints and tees she sells. She mentioned in an interview with Threadless how much work it is to maintain Parlor Tattoo Prints full time, and it’s truly a labor of love.

“Although I’ve been the hardest and most micro-managing boss I’ve ever had, it’s been a dream come true. A long day would be painting during the late night hours to morning. Posting my new painting to the social networks around 7am. Getting some sleep between 9am to 12pm. Then processing orders from 12:30 to about 4pm. I was doing that almost daily for the first couple of years. It was intense. I’ve been nicer to myself in 2015.”

She’s insanely disciplined, and it’s paid off for her in multiple ways.

Some Advice from Quyen:

“You can’t just work hard, but you’ve got to work smart. Be honest with yourself and know both your strengths and weaknesses and pick your endeavors accordingly. Develop a personal style and stay consistent. Use social media to your benefit. But most important, study, train, and practice. There are too many great talents out there and you want to compete as best as you can.”

The Takeaway from Both of These Awesome, Artsy Ladies:

Both of these artists have their art on various canvases, post consistently, stay on top of their own current events and trending events, and each have their “thing.” They also include themselves and their stories in their social media and stories.

We’re an artist community built on the power of helping each other succeed — if you’re reading this and have tips of your own to share, please do so in the comments! Thank you!