“The comfort zone is the great enemy to creativity; moving beyond it necessitates intuition, which in turn configured new perspectives and conquers fears.”

I’ve always been amazed at comedians. Because stepping out of their comfort zone is a job requirement. That awkward puberty phase of a comedy routine where jokes fall flat or totally bomb isn’t optional: you can’t know which jokes work by thinking about them, you have to test them out.

Comedian Gad Elmaleh stands out to me. He isn’t a household name here, but he’s the Jerry Seinfeld of France. On an episode of This American Life, he talks about how he took a break from filling thousands of seats in massive theaters in France for tiny comedy clubs in the U.S. Why? His answer is inspiring to any creative who feels stuck in the artistic doldrums. Basically, comedy in France got boring. People would laugh at whatever he said. He compared it to chewing gum that lost its flavor, and touring the U.S, performing next to anonymously for a new audience and a brand new humor he wasn’t used to was putting sugar back in the gum.

We don’t all have to step on the stage for open mic night, but we can all learn from the creative growth of a comedian like Gad. Because stepping outside of your creative comfort zone is necessary for keeping your creativity and inspiration fresh, but also helps conquer some of the fears that hold it back.

When it comes to creative work, I have a motto: as soon as you get too comfortable, it’s time to try something new. Being creative is all about being able to look at the world in a different way. Without new experiences, we plateau in a routine that leads to creative block. At the risk of pushing the gum metaphor a little too far, think of the creative brain as a gum ball machine. If each gum ball is an experience, being in the comfort zone is like pulling from the same machine without refilling it.

‘Stepping out of your comfort zone’ gets a bad rep. Too often we think that in order to get a creative reboot, you need to do something that terrifies you. And true, trying new things and pushing yourself can be anxiety-inducing. But just because, say, studies have found that early traumatic experiences spur creativity, does that mean if you didn’t have a terrible experience, you’ll never be creative? Hell no. But a little anxiety, just an enough to keep you from slouching in your chair? That can help. It’s like walking on hot coals: you want the coals just hot enough that you have to be careful and aware, but not so hot that you get burned. 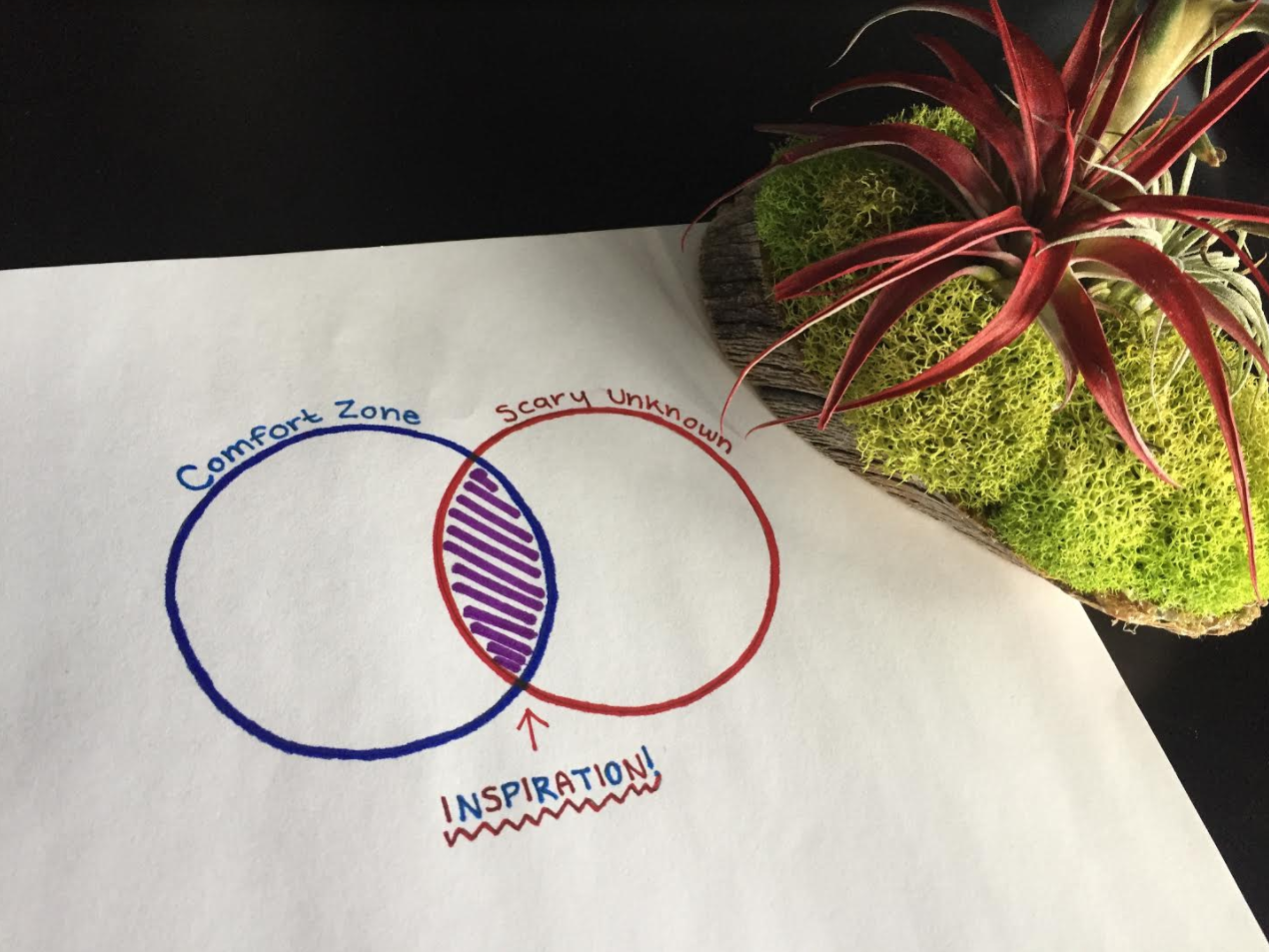 And when we do push far enough to do something that scares us a little, just the act of facing that fear expands what you thought you were capable of and your mind. One summer, I took two weeks of immersive writing classes at The Second City in Chicago. Because it was a writing class, I thought I would get the full Second City experience with none of the improv. But almost right away on day freakin’ one, the teacher stood up and said, “ok! We’re going to improvise a little!” Of course we were. As a person with insanely bad social anxiety, this was my living nightmare.

So what happened? I ended up learning more in two weeks than I had in years. Because yes, it was the literal embodiment of Eleanor Roosevelt’s famous saying,“do one thing every day that scares you”. But learning that I was capable of doing something I never thought I would be able to do because it made me so uncomfortable opened up my creativity by showing me what I could do. When we do something we never thought we could do, or something that maybe does scare us a little, it’s no longer “something we could never do.” It’s “something we did.” And every time you do something new, that ceiling of where we think our limit is goes up just a little bit more.

It’s not fear that spurs creativity: it’s stepping just outside of your comfort zone enough to gain a new experience. Learning something, doing something that expands our perspective or makes us think in a different way. Psychology Today summed up a paper from the Journal of Experimental and Social Psychology about this as saying, “Any life experience – from the traumatic to the joyful, can lead to flexibility and creativity as long as it diversifies your experiences and pushes you outside your normal thought patterns.”

In other words, try new things: it helps expand your brain.

So go sing that song at karaoke. Do that open mic night you’re always too afraid to do. Because maybe it’s totally embarrassing. But whether it goes better or worse than expected, you grow from it and gain an experience from it in a way that you wouldn’t if it remained just a “what if?” in your mind.

Sources and resources for you about stepping out of your comfort zone:

We’re an artist community built on the power of helping each other succeed — if you’re reading this and have tips of your own to share, please let us know in the comments! Thank you!