Online stores like Artist Shops can be used for a lot more than just an artist selling their personal work. You can get creative with them by opening an Artist Shop that sports team apparel (see what I did there) or sells designs that support a cause.

And one of the clearest examples of that that we have in Artist Shops is “Bernie Threads.”

You no doubt recognize the design of the “Not Me, Us” Bernie Sanders poster design that took the election by storm a few months back. The artist, Aled Lewis, opened up an Artist Shop to sell his Bernie designs and support the cause that he was passionate about.

Bernie Threads strikes a happy balance between being all about its subject matter, Bernie Sanders, and making Aled Lewis’s personal branding front and center as well – his logo, website, and name all appearing in the cover image of his shop.

The Bernie Threads Shop is also not designed to be a one-stop shop. That is, besides just being a go-to for apparel to support the candidate, the cover banner makes clear that you can donate to the campaign and tells you where you can do it. There’s also a link to the donation page in every product description – which makes it a great tool for Aled to promote himself secondarily, but also makes it a great support shop to get money to the campaign it supports. 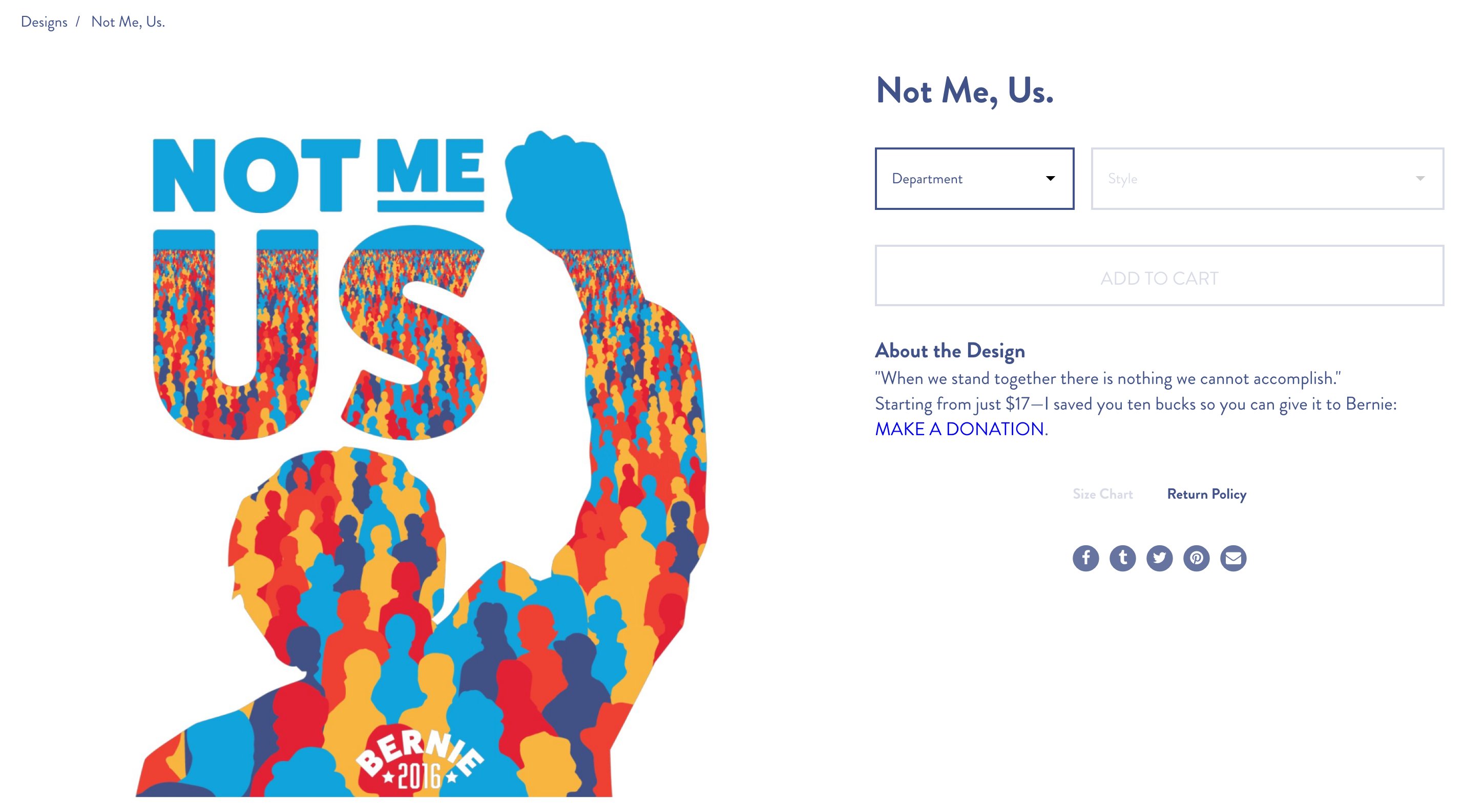 If you look at Aled Lewis’s Facebook account for his art, he has a great model for promoting his shop:

*A post featuring a gif of his “Not Me, Us” design got literally hundreds more likes than more regular posts – making a gif for your designs/shop is a great way of promoting it

Benefits of opening an Artist Shop for a campaign/cause

Check out the interview with Aled Lewis below!

So first, a little background! Tell us a little bit about yourself: what do you do, where are you from, what’s your favorite color combination, etc?

Tell me a little bit about your Bernie Threads Artist Shop! I saw that it was recently officially licensed to the Bernie Campaign.

So – I’m a big Bernie supporter. While I know it would be neat to have a woman President, Senator Sanders is offering bold and pragmatic solutions to tackle the root causes of social and wealth inequality, starting by getting money out of politics. He’s been championing the same causes for 40 years and finally people are listening to him! There is just a lot of energy and optimism surrounding his campaign and it is great to be a part of it.

The campaign have licensed my artwork and they’ve already used it quite a lot in their digital media and used it made it’s first appearance in a video last week. It’s great to be a part of the official campaign.

Your “Not Me, Us.” poster has been called the new Obama “Hope” poster, which is easily one of the most iconic political posters of all time – how does that feel?

Fairey’s ‘Hope’ poster is the iconic political poster of our time. Such comparisons are very flattering but I won’t get carried away by them! They are quite different stylistically and I think that they aim to do different things conceptually.

Did you go through a few different design possibilities before landing on the now iconic one?

Well the honest answer to that is no. I didn’t approach this like I would client work or sketchbook work. I knew early in 2015 that I wanted to make a poster for Bernie and I decided that is the idea crystalised in my mind, I would do it. Late in the year I can remember telling a friend that the poster would feature a huge crowd very prominently as well as the familiar figure of Bernie, fist raised. It wasn’t until a rally in Cedar Rapids, Iowa when he uttered the immortal words “Not me, us!”, that I could finally visualise what I was going to do. That moment struck a chord with many of his supporters and it was a neat fit for what I had in mind.

Did you have any idea your “Not Me, Us” design would gain the kind of popularity it has? What’s it been like seeing it explode on social media?

I suppose I hoped that it would resonate with the supporters and be seen and shared amongst the grassroots network but I didn’t anticipate it taking off in quite the way it did. It brings a smile to my face every time I see it reposted, or pictured at a Bernie event or used as a profile image on Facebook or Twitter. It is the best kind of validation of your work as a creative.

It’s really cool that you’re so involved in the US election right now as a person from the UK (especially after the poster’s taken off so well!) Have you always been this involved in US politics or just this election in particular?

I’ve always loved politics and always had an opinion on political events in the UK but as I’ve gotten older I’ve learned a lot more about the American political system and it is fascinating. The Internet has made the world a very small place and there is a huge amount of cultural and political overlap. What happens in the US matters in teh UK. Since I got started with Threadless 8 or so years ago, most of my work and income comes from the US so I feel I have a stake in the events of US politics despite not being a US citizen. Furthermore, POTUS come with the unofficial title of ‘Leader of The Free World’, so you’d better believe the free world cares who is President!

Have you heard from the man himself, Bernie Sanders?

Hah! No, I haven’t heard from Bernie. I’ve spoken to a bunch of different people at the campaign but he is much too busy meeting with and talking to people who matter! I got a chance to meet Bernie’s brother Larry who lives in the UK at one of the many Bernie events in London and he is a really sweet guy and extremely proud of what his brother is doing. Maybe if Bernie wins the election, he’ll invite me to the Oval Office for a cup of tea.

I LOVE your Toy Confidential series! How did that start? Was it a personal project or commission? (Are all the toys yours?)

Thank you! That started as part of a personal project where the challenge is to make something new everyday. It evolved from the need to develop a format that wouldn’t take days and days to finish. I saw a bunch of horse figurines in toy shop and started goofing around with them and imagined them having a conversation and that really was the starting point. I saw how nicely they photographed and wrote in the copy and the rest is history! All the toys are mine and I have thousands of them. Too many for our little London flat!

Your Instagram has a picture of Simon Pegg/Edgar Wright/Nick Frost holding your work! Amazing! How did that come about?

That was part of an Edgar Wright group show in Gallery 1988 in LA a few years back. I did a couple of prints for that show in a 16-bit game style and that is a picture of them in the backroom of the gallery holding up a few prints from the show. I guess they probably picked out prints they liked for the photo and both Simon and Nick picked out both of my prints, which was pretty awesome.

You’re part of the Threadless community too! Why did you decide to open your Bernie Threads shop through Artist Shops?

I am! Have been since 2007! I had so many requests to put the design on a tee that I started looking into how best to do it. I had a conversation with your wonderful boss (Jake Nickell!) and he suggested the best thing would be to open up a Threadless Artist Shop so he helped me put one together. This really is the best of all worlds. I don’t have to think about production and fulfillment and tees can be ordered on demand which means I can try out new designs as well.

Oh, man. I can’t tell you how many times I’ve rewatched Always Sunny. I literally have lost count. It is my background music while I work. We are really spoiled for TV shows at the moment and House of Cards, Mr Robot, Broad City, Rick & Morty are just a few that are blowing my tiny mind, but for rewatchability an originality I’m sticking with Always Sunny. Favorite movie? Jurassic Park of course.